On this page you will find the significant developments of consumer digital cameras.

Then the improvements in sensors that have enabled prints to be made from digital cameras. An interesting evolution is Foveon's image sensor that takes a new approach to digital camera sensors. Finally the first affordable digital SLR from Canon.


digital-photography-tips.net is updated regularly. To learn out about the updates as they happen subscribe to the digital photography blog, and this site's RSS feed.

A new era in photography began on August 25, 1981 when Sony unveiled a prototype of the company's first still video camera, the Mavica (Magnetic Video Camera).

It recorded analog images on two-inch floppy disks (memory sticks hadn't been invented back then!) and played them back on a TV set or Video monitor.
NB: The ‘Mavica' name comes from Magnetic video camera.

The Mavica was not a digital camera, but a still analog version of the video cameras of the time.


The analog version is a physical representation of music; while the digital version is an encoding of the music.

Storing images on floppy disks was an important development because it meant that, the number of photographs that could be stored was, effectively, limitless. If you filled the floppy disk up with photographs you just inserted a new blank disc.

The capacity of these blank disks was less than 1MB. Back in 1981, and with a Mavica, you could store about 25 photographs on one disk.

NB: A high quality photograph from today's digital cameras is easily 1mb. At best you'd only be able to store one photograph on a floppy disk! Thankfully, the memory card has been invented since then, capable of storing hundreds of digital photos.

From this point forward the history of digital photography is one of improvement rather than new development, with the possible exception of the Foveon X3 image sensor.

The race for more megapixels

To get good quality photographic prints the resolution had to be improved. To get a good quality snapshot print you need to have at least 2 megapixels, and ideally 3MP. (have a look at my table showing how many megapixels are needed for good quality digital photography).

So, although Sony were first through the door of the digital photography party, their first digital camera was limited in both its use and popularity.

For consumers, the history of digital photography springs to life with the introduction of 2 and 3 megapixel cameras.

Nikon were first past the post on this one, introducing two 2 megapixel cameras at the start of 1999. One camera had a zoom lens (the "Coolpix 950", shown here), the other ("Coolpix 700") had a fixed focal length.

NB: Kodak had already introduced "professional" digital cameras with 6 megapixels before 1999, but their camera could hardly be considered one for the consumer – it weighed 3.75 pounds and had all the style of a house-brick!

It's not just about the size of your megapixels, it's what you do with them!


In 2002 Foveon started producing a new image sensor. The reason why this is an advance is that up until this point digital camera sensors have recorded only one type of light at a given location.

Individual ‘photosites' (these are the pixels of the sensor) collect information about either red or green or blue light.

The difference with the Foveon sensor is that it collects information about Red, green and blue light at every photosite. The image below illustrates the difference:

A Rebel with is born 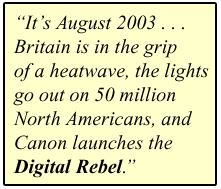 The development of digital cameras continues from this point with the cameras steadily improving all the time. They now have even more megapixels and cost even less.

The next significant step in the history of digital photography is the introduction of the digital SLR.

Digital SLRs had been available up until now, but they were strictly for the professionals. Costly and heavy they were never going to become mainstream. Canon changed all that in August of 2003.

In the summer of 2003 Britain was recording its hottest day ever (101.3 degrees at Faversham in Kent) and the lights went out on 50 million North Americans – the result of a massive power outage. Canon was launching the Digital Rebel.

This camera is of huge significance in the history of digital photography because it was the first affordable digital SLR.

Suddenly keen amateurs with film SLRs, who had built up a lens collection, could just take their lenses from their old film cameras and attach them to the new Canon. The camera also offered fast response times unlike the compact cameras up until this point.

For film, the end is nigh

What of the future history of digital photography . . .

Today it's possible to buy a reasonable 3 megapixel camera for under £100.

Technology never stands still though. Few would have predicted the stunning growth of digital photography, even ten years ago.

And now digital cameras outsell film. Some manufacturers have already pulled out of the film market completely. So, with film cameras going the way of the dodo, perhaps the history of digital photography truly starts now? 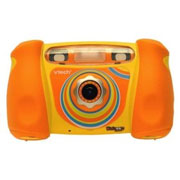 UPDATED: June 2015. After checking the latest cameras and prices available online, it seems things have moved on ... again!

3 megapixel cameras just don't seem to exist, unless they are those colourful and rugged digital cameras aimed at kids. The image resolution for a "bottom of the range" digital camera is now upwards of the 6 megapixel mark.

An interesting development is now the growth of digital cameras on smartphones. The sensors on these pack in more and more megapixels (more than a few have over 12 million pixels on board).

Added to that is the software enhancements found on smartphones. You can do a panorama just by moving the phone in an arc, you can do HDR photography without trying, and you can make multiplicity photos in an instant. 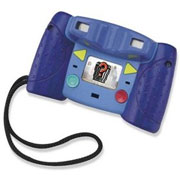 Return to the top of this page and click through the links for more on the history of digital photography. Or, contribute to this site! Add the history of your digital cameras - simply type in the box below:

What was the first digital camera you owned? Spend a moment to tell us about it.
When did you buy it? What brand? Megapixels? . . . ? Anything great about it? Anything poor? (Go on, get it off your chest!)

Click below to see contributions from other visitors to this page...

The fixed lens DSLR no longer exists as a category of digital camera but in the late nineties this type of camera was quite popular. Mine was a 1997 …

In 1998, I was working for a Government Department, coordinating a newsletter to be circulated to 'stakeholders'. I was able to convince my Supervisor …

Vivitar Not rated yet
Small and compact which was great at the time but when you compare the pictures take by it and my current Nikon D40x there really is no competition. …

Olympus D-100 Not rated yet
Great point and shoot camera. At that time 3 megapixels was a lot for a digital camera. Took good pictures, compact size. Did not come with rechargeable …

Sony Mavica 2.1 mp Not rated yet
I loved/still love this camera. It saves to memory stick and floppy...it was easy to share pics and upload. I have had many cameras since but still …