It should be easy to get a good black and white picture from a modern digital camera. After all, most come with a special black and white mode. But my advice – steer clear of any of those special camera modes!

If you haven't already, read my black and white photography home page to find out why.

Ok, I'll assume that you've had a look at my other black and white photography pages, and are sitting at your computer with good image at the ready. You have fired up Photoshop (or another good photo editing software), and have a steaming hot cup of coffee standing by to see you through!
NB: in the tutorial below, words in bold green refer to menus and menu items in Photoshop.


The example image I am going to use is shown below. It's has good contrast and is a little “gritty” – a perfect start image for a black and white picture.

In case you're interested, I took this photograph in the Peruvian Andes. Its an old volcano. The small “cones” you can see coming off the rock are the remains of lava that was stuck inside the mountain. The top of the mountain has worn away, leaving the harder-to-wear-down lava cones behind.


So, how do we turn this colour image into a great black and white picture?

First, you need to add a new layer. To do this, go to Layers, (arrow number 1 below) and then go down to New Adjustment Layer and choose Channel Mixer… (arrow number 2 below).

NB: It is always a good idea to make adjustments like this on a new layer in Photoshop. That way you can edit the layer later if you think it needs some adjustment. Or just delete it if you decide you don't like the effect it has. And you won't have altered your original image at all.


Once you have clicked on Channel Mixer a window will pop up asking you to name it. Give it a name if you like, or just click on OK and you will see the Channel Mixer dialog box appear.


Have a look at the one below:

You will see that the channel mixer allows you to adjust the levels of all three channels in your image (the red, green and blue).


We're interested in making a black and white picture here, so the first thing to do is tick the Monochrome box (arrow number 1 above).


Also check that the Preview box is ticked, so that you can instantly see the effects of changes you make.


Once you tick the Monochrome box you will see your colour digital photograph turn into a black and white picture!


But wait . . . there's much more , and this is why the channel mixer is so much better for black and white photos than using simple greyscale.


Each channel of colour information is still there in your image. You can control it by using the red, green and blue sliders.


If you move a slider to the right (increase it), it will make those coloured parts of the original image lighter.


For example, if your original colour image has a blue sky (like my image does) and you move the blue slider up, the sky (in black and white mode) gets lighter. Move it down and the sky gets darker.


The same applies to red and green. Lots of green trees in the original? Move the green slider up and they turn whiter in the black and white picture. Move the slider down and they get darker.

We can create the same effect here by moving the red slider up. Have a look at the next screenshot below. I've adjusted the Red channel to +20 (arrow number 1 below). This instantly gives your black and white picture a lift.

NB: you will notice that the red channel is already set at 100%. You will still need to push it up a little to get a good effect.

It's important to adjust the Constant slider at the bottom (arrow number 2 below). This balances your picture a little.


As a general rule, add up your total adjustments for the red, green and blue channels. Whatever number that is, halve it, reverse it, and make that your Constant value.


Once you've had a play with the sliders, and like the effect you have, simply click OK and you are done! A top notch black and white picture!


My example is shown below: 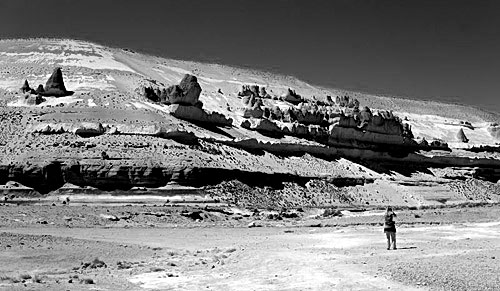 Final steps . . .
If you are going to print your black and white picture, you will need to flatten the layers. Go to Layer and choose Flatten Image.


If you were planning to print your black and white picture at home, then I would strongly recommend you don't! Use a print service. Have a read of my printing tips home page to find out why.

Next Steps . . .
Now that you know how to produce a top quality black and white picture - have a go, and then show if off to other visitors to the site!

Click here to contribute your black and white photo