I strongly suspect the introduction of smartphones had a lot to do with it, but since then the market has gone from a fairly small niche to something that is firmly mainstream.

Heck, you can't move in the App Stores for image editing apps - they're everywhere!

And if you ask me I think that's teriffic! If you can put those complex image editing techniques into a simple-to-use app, then why not?

Some photographers think they're magicians

I genuinely feel that photographers do act a bit like magicians sometimes. 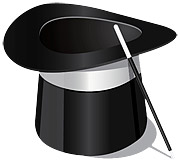 Well, I like to think of myself as the Penn & Teller of the digital photography world, so if there are photography secrets out there, I'm happy to pass them along!

But back to the point of all this. I've split this section up into:

What is image editing software?

For the un-initiated, you might well be wondering what on earth this editing software stuff is all about.

When your camera takes a photo, what happens if the image sensor, buried deep inside your camera, captures light.

That sensor has millions of 'pixels' on it (they're not really pixels, but imagine they are and you're on the right lines!). Each pixel is covered with a filter to capture either red light, blue light or green light.

Once captured, the clever electronics, and software, in the camera turn the light captured into an image.

And this is where the first piece of image editing software comes in - the software built into your camera does the job of converting light into an image.

Once you have your image, you could just enjoy the pictures.

Or .... you could load the image up onto a computer, or these days open it in an App on a mobile phone, and make changes to the image.

And that's the job of image editing software - it's the software that's used to make changes to a digital image.

Those changes could be subtle - for example just brightening up the image a bit, or they could be more dramatic - like removing a chimney sticking out of a person's head!

But whenever you are making changes to the photo that came out of the camera, you're using image editing software to do it.

What software is out there


The biggest player in the image editing software field is undoubtedly Adobe who dominate the professional market with Photoshop.

Realising that the average man in the street didn't need (or even understand) all the features of Photoshop the bigwigs at Adobe went away and thought about how they could tap into this growing market.

And so Photoshop Elements was born. Not the cheapest software on the market, but definitely the best in its category.

Not to be outdone many other software manufacturers came up with their own versions.

Corel came up with Paint Shop, Serif had Photo Plus and even Microsoft had a go with Digital Image – but found they were better at operating systems and office software and swiftly bowed out!

Then Google threw their hat in the ring with free image editing software, Picasa.

And at the time there were a whole bunch of keen programmers who created software in their spare time and distributed it for free.

And then there are all the Apps that have been created. These often produce a range of special effects, rather than offer more serious image editing capabilities.

But you know what? For a lot of people, that's all they want and need.