Shutter speed – how it can be used for creative photography

Shutter speed? If you own a point and shoot compact digital camera you may never have come across the term before.

This is because these cameras do pretty much everything for you in terms of exposure so that your photos are well exposed every time. If you find yourself with a camera that has settings for "shutter speed" (have a browse through your manual if you're unsure), then you're lucky! You'll be able to make use of the effects outlined here.

And, with a little help from a great little ebook I've found, you'll be making creative use of the shutter speed in no time!
digital-photography-tips.net is updated regularly. To learn out about the updates as they happen subscribe to the digital photography blog, and this sites RSS feed.

First off, slow shutter speed. We use this for two reasons – first, because it's quite dark and we need to let more light into the camera. Or second, because we want to introduce some blur into our photo.

What? Blurry photos? Yep! That's right. Sometimes we can use blur for a creative effect. Below there's an example of how we can use blur to emphasise a certain part of a photo: 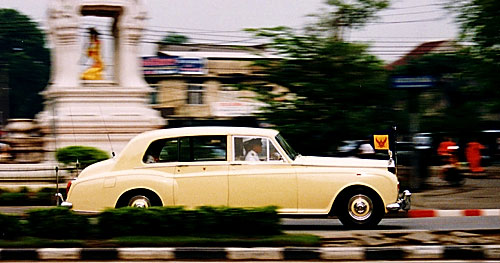 I took this photo in Bangkok. It's the Royal Family's Rolls Royce whizzing past. I wanted to emphasise the movement of the car, so I deliberately chose a slow shutter speed and used a technique called "panning".

Panning is a photography technique where you follow your subject as it moves. It's something that's written about in one of my favourite ebook bundles. In the case of my photo above I followed the Rolls Royce as it moved from left to right. This following action is the panning part.

Because I had chosen a slow shutter speed (in this case it was 1/15th of a second) I got a blurred background, but the car remained sharply in focus.

So how did that happen? Well, it's because I was panning my camera, and tracking the car. Therefore for the time the shutter was open I kept pace with the car. Relative to my camera the car didn't move in the frame, but the background did. Hence the background appears blurred, and the car stays in focus.

The key thing to remember about using a slow shutter speed is that anything that moves in the scene will blur. Once you're aware of this you can use it creatively in your photography. And if it's creative ideas you're after there are plenty in this eBook. It also explains the elements of visual design which can really help unleash your creativity! 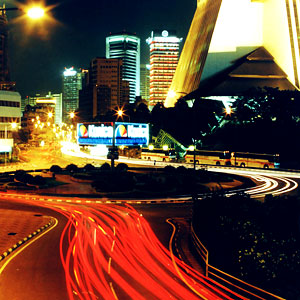 I took this photo in the centre of Kuala Lumpur, standing on a bridge near the central bus station.

I wanted to get light trails from car headlights and tail lights.

To do this I chose a very slow shutter speed (ten seconds).

I then balanced my camera on the handrail of the bridge, and tripped the shutter using the self timer.

The result demonstrates the principle that, with slow shutter speeds, anything that moves will blur (in this case, the lights of moving cars), but anything stationary in the photo will stay in focus.

Ok, so what about fast shutter speeds?

If slow shutter speeds allow you to get creative with blur, fast shutter speeds have the opposite effect – they freeze movement. With a little practice, and some guidance from the book (such as how to set the correct shutter speed for action photography), you'll soon get the hang of using faster shutter speeds to good effect.

What this means is that the shutter opens for just 1/8,000th of a second. In this brief moment, time is frozen. As a photographer you can use this brief moment creatively to capture movement.

Take a look at the photo to the left here. I set this one up with the help of the wife (luckily she tolerates my experimental photography rather well!).

What I wanted to show was a way of capturing a moment in time. So I decided to do this by capturing a drop of water as it hit liquid (in this case, it was a cup of tea!)

Clearly, I needed to use a fast shutter speed for this. I selected a speed of 1/4,000th of a second, and then got my wife to drop water into the cup. It took a few tries – 62 to be precise - to get it right.

Eventually we got there, and thank goodness for digital photography – it would have cost us a fortune in developing costs otherwise!

Because I used such a fast shutter speed, all movement in the photo was frozen. Completely.

There is one downside to using such fast shutter speeds – you need good light, and you need a wide aperture. Often you will only get apertures wide enough on prime lenses (and some of these can be rather expensive!)

There are other ways to use fast shutter speeds. One of the most common is to freeze movement in sport. Pro sports photographers use fast shutter speeds to capture the action. You'll notice they all have large lenses attached to their cameras – those are those expensive lenses with wide apertures I mentioned!

With good light, and a high ISO you should still be able to make use of fast shutter speeds, without the pricey lenses!

Now you have an understanding of how to use fast and slow shutter speed creatively, you might find the following pages worth a read: