Understanding aperture and how it can help your photography


If you own a point and shoot compact digital camera then you may never have heard of aperture. This is because these cameras do pretty much everything for you in terms of exposure so that your photos are well exposed every time. They tend to do a good job these days too. Years ago cameras didn't come with "auto" settings.

The photographer had to set the shutter speed and the aperture manually for every photo.

I remember using light meters and making fine adjustments to my camera just so that I could get a well exposed shot.

It was a real pain!

The one thing it did teach me though was how exposure works.

So what is this aperture thing all about? Should you be concerned about it? How can you use it to take better photos? This page will answer your questions!

What is the aperture?

Think of it in these terms; a properly exposed photo might need 1,000 "units" of light to hit the sensor.

Your camera can do one of two things to ensure 1,000 units hit the sensor; it can open the shutter for more time - this is called the shutter speed. When the shutter opens, the sensor on your digital camera is exposed to light. When it closes no more light can enter.

If opening the shutter for half a second lets in 500 units of light, doubling that to one second will let in the 1,000 units you need for a well exposed photo.

Roll your mouse over the photo below to see the aperture open and close: 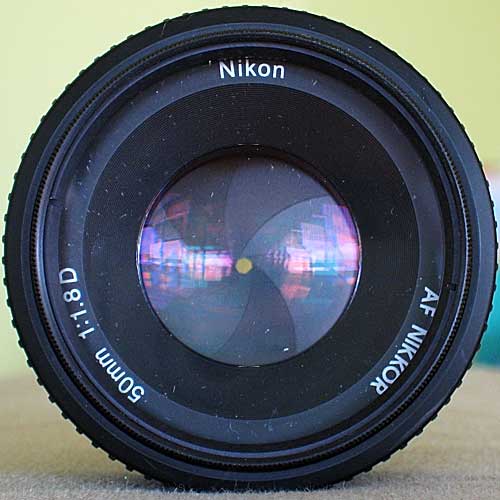 It's just a fancy name for a hole


As you can see from the images above, the aperture is little more than the hole at the front of your camera!

It's made up of a few blades of metal that can be opened up a little (and let more light in). Or they can be closed. This will shrink the hole and let less light in.

Should you be concerned about it?


So, should you be concerned? This depends on whether you are likely to make use of the creative effects the aperture has can make.

The effects – take one;
When you can adjust the size of aperture at the front of your camera, it also has an effect on the shutter speed – open the hole up (let in more light) and the shutter speed can increase (i.e. opens for less time).

This is an important effect. Photographers often use a fast shutter speed in order to freeze action. In this case you need the aperture to open up wide to allow enough light to hit the sensor.

Sometimes, photographers want a slow shutter speed. This is used for creative effects to show movement by blurring parts of a photo. In this case you need a small aperture as you want to limit the light entering the camera. Because less light comes through that hole the shutter needs to open for longer, and we get that blurring effect.

The diagram below shows the relationship between the aperture and shutter speed. You'll see that, at any point on the diagram the full 1,000 "units" fall on the image sensor.

You'll also notice that as the aperture gets larger (i.e. the hole gets bigger), the shutter is open for less time (i.e. a fast shutter speed). And visa versa as the aperture is closed down.

The effects – take two;
The other way photographers use the aperture is to control the depth of field.

Depth of field is a way of describing how much of a photo is in focus. The easiest way to explain this is to show you - click here for an explanation of depth of field.

How it's measured - just to confuse you!

The measurements are called "f" stops, and are given as a number. The confusing part is that the smaller the number, the larger the aperture (and the larger the hole is, and the more light can enter the camera). A small aperture is a small hole, but a large "f" number.

Each step up in the numbers represents another "f" stop, and allows half the amount of light in. So, there is half as much light entering the camera using f2.8 compared with f1.8.

Read more on how you can use aperture to control depth of field for creative effects.

And to find out more about controlling exposure - click to return to the understanding exposure, aperture, shutter speed and ISO home page