One of my first D50 shots

I'd convinced myself before the D50 was given to me as a Christmas present that I would never go digital.

I was staying with film.

Boy was I wrong!

Once I started using the D50 things began to quickly change.

The advantages of digital over film just can't be ignored.

I still shoot film every week, but the majority of my shooting and business is digital.

I'm not one of those either or guys, I shoot both for specific reasons.

That's my story and I'm sticking to it.


Nice story Joe. I think many of us who switch from film to digital do so with some scepticism. And I’ve met more than a few photographers who have made the change and are pleasantly surprised!

The Nikon D50 that Joe refers to was released in 2005. It is one of a long-ish line of Nikon DSLRs.

It has 6 megapixels, and, as you can see from Joe’s shot above, in the right hands it takes excellent photographs!

Click to read about the advantage of digital slr cameras. 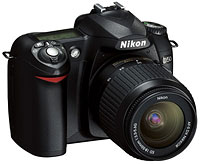