First of all, you may be wondering what macro photography is?

Sounds like one of those technical terms that photographers dream up so that they can sound important!

There's a simple answer though, which pretty much defines the term 'macro photography', and then there's the more scientific answer.


Macro photography is a posh way of saying 'close up'

Well, that's not a bad start. 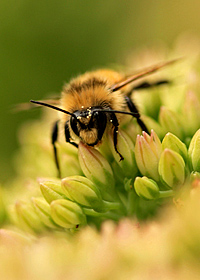 Strictly speaking, it's not, but it's a good a starting point as any.

But when I say close up, I don't just mean zooming into your subject. I mean really close up.

Imagine a photo of an insect (and a lot of macro photography, for reasons explained below, seems to be of insects), in close up, so that you can see its legs, head, and those big, bug, eyes really clearly.

Consider that to be macro photography!

A lot like the picture of the bee here - a nice close up where you can see his eyes, legs ... really clearly.


But a better definition of macro ...

... would go further than just be considered 'close up'.

When people wandered around with their film cameras, happily snapping away, macro meant 'life size'.

And what life size meant was that the thing you were photographing was the same size on the film as it was in real life.

Bear in mind that 35mm film (the film of choice for keen photographers!) measured 36mm by 24mm. So life size, meant that the subject you were photographing needed to fit, life size, in that space.

If it were the bee in the photo above, it would fit onto a 35mm film frame quite snugly, as the image below shows:

As you can see, a life size bee!

But things are different in digital photography

Mainly because digital camera image sensors are, in the main, much smaller than a 35mm film frame.

Unless you have spent a lot of money on a very expensive digital camera, your image sensor is likely to be about a quarter of the size of a film frame at best - and is probably a lot smaller still.

The blue rectangle is roughly the size of the image sensor in a compact digital camera, and if you're using your phone camera, it would be much smaller than even the blue rectangle.

Well, life size would have to be something pretty small in order to fit onto a digital camera's image sensor.

Imagine fitting that bee onto a digital camera's image sensor - you'd be lucky to get even his left eye on!

Which brings me onto two things - earlier I said that insects seem to be a popular subject for macro photography.

Now you see why!

Because macro is all about 'life size' photography, there's not much that fits on a film frame 'life size', except for insects. Hence, insects are a popular subject.

And the other thing ... well, it seems unfair to stick strictly to the true definition in digital photography, because there's even less that will fit onto the small image sensors in digital cameras - even most insects would be too big!

So here's my definition of macro photography

... brought up to the 21st century digital world.

I would consider it to be photography where the thing you're taking a picture of is at least life size on the camera LCD screen.

I realise that some camera screens are larger than others, but of you've just photographed a bee, and then you look at the image on your camera screen, and it looks life size or bigger, then I'd say that's macro photography!

If this area of photography piques your interest, why not have a go yourself?

Have a look at these macro photography tips to help you get started taking great close up photos.


Return from the macro photography page to digital-photography-tips.net home