How to photograph lightning

Lightning is one of nature's true wonders. Here's where you can find out how to photograph lightning!

There're a few things you'll need (a camera for a start!), but mostly it comes down to technique.

On this page I've gone through a simple method to capture those bolts from above in all their glory. Read on to find out how to photograph lightning ...

Some of the things you'll need to photograph lightning are obvious, and some less so.

Here's a quick checklist of the things you'll need: Let's start with the camera. You'll need a camera that allows long exposures; and by that, I mean one where the shutter can be kept open for at least 30 seconds, and, ideally, even longer.

If you have a digital SLR camera you should be just fine. If you have a compact camera ... well, check the manual and see if there's a 'night mode' option or a manual option.

Either of these might work, but the key thing is that the shutter on your camera is open for a good length of time.

For digital SLR users, also check to see if you have a 'bulb' setting. 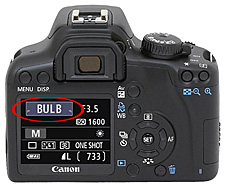 The bulb setting is where you press the shutter button, and then keep your finger on it.

The shutter will stay open as long as your finger is on the button. Once you release the button, the shutter closes.

This is the best setting to use if you have it!

And rather than actually pressing the button and holding your finger down on it (which has the potential for camera shake), you can buy a remote shutter release that will allow you to do the same thing, but remotely - so you don't have to hold the camera button down.

How to photograph lightning - the tripod

You'll need a tripod because you need to keep your camera steady while the shutter is open.

You might be able to get away with keeping the camera steady on a solid surface (a wall or rock can work well), but a tripod would be even better.

How to photograph lightning - a good vantage point

This is one of those obvious ones - a good vantage point.

Ideally you need to be up high somewhere so that you have a good view of the lightning.

Suitable spots are high up on tall buildings, the tops of hills and places that are flat where the lightning occurs at a distance in front (across a body of water is excellent!)

If you don't have a good vantage point it makes it quite difficult to capture the lightning.

It's best to be at a distance from the lightning so that it will be captured in the frame. If you're 'in it' so to speak, you're too close to be able to capture it.

How to photograph lightning - the lightning itself!

Obviously you're going to need some actual lightning. 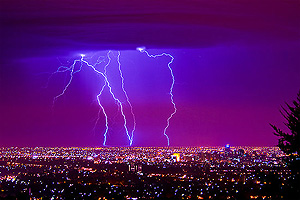 And some places are better than others for this.

The best thing to do is keep an eye on weather forecasts and find out where storms are occurring.

And, unfortunately, not all storms are good ones for photographing lightning.

You see, some storms have lightning that shoots within the cloud itself. This illuminates the cloud, but you can't actually see the lightning bolts themselves.

What you are really hoping for are the storms where the lightning shoots from the cloud to the ground - that's when you'll be able to capture the bolts of lightning.

And a final word before getting onto the technique of capturing lightning - stay safe!

If you're standing on top of an exposed hill in a lightning storm, clearly there's potential to be hit with a bolt!

That's unlikely, but not impossible.

Tall buildings - if it's a building you're familiar with you're probably going to be ok.

But don't try getting into or onto buildings that you shouldn't be in - that's just trespassing.

So, much as I'd love for you to capture some great photos of lightning, never put yourself in danger trying.