What is a dSLR?

What exactly is a dSLR? If you once had a film SLR camera you would have been used to the concept of digital SLR cameras, or dSLR as they're often abbreviated to.

Digital SLR cameras are larger than 'normal' cameras because there is a pentaprism (or, in cheaper versions, mirrors) that reflect the light from the lens directly into the viewfinder. You really are seeing what the camera is seeing. 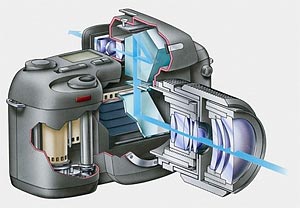 The illustration here is of a film SLR camera and shows what I mean (a bit clearer than my explanation!).

Light enters the lens, and gets bounced up on the mirror (the mirror sits in front of the shutter - in this illustration the shutter looks like a venetian blind).

The light then passes through the pentaprism and is reflected off of two sides of the prism (think of the prisms that you might have used in science class - very similar).

The 'SLR' part stands for Single Lens Reflex - single lens (i.e. only one lens!), and reflex because the light 'reflexes' off of the mirror.

Of course, this is a film SLR, not a digital SLR

But the principle is exactly the same.

From there the image is 'projected' onto the camera's LCD screen and this is what you use to frame your shot.

With the advent of digital compact cameras casual photographers are now able to see what the lens sees. Old film cameras and early digital cameras had a small viewfinder just above the lens.

You saw what the viewfinder saw but the camera saw what the lens saw - and it wasn't always exactly the same thing!

This is partly why, in the days of film cameras, the photos you picked up from the developer weren't always exactly what you saw when you took the photo.

The obvious difference between a dSLR camera and a compact camera is the size. And with the size comes weight.

The photo above clearly shows the relative difference in size between a digital SLR and a compact camera.

The weight of the digital SLR is, as you might imagine, substantially more than the compact camera. To give you the official stats - the compact camera here (a Canon Ixus, sometimes branded as a Canon Elph) weighs 165g. The digital SLR (a Canon 500D, sometimes branded as Canon Digital Rebel) weighs in at a hefty 480g - and that's without the battery or lens.

Add the battery and a medium zoom and the total weight of the Canon rises to wrist-straining 1.1kg - dSLR cameras are indeed heavy!

In a world where there is an almost constant emphasis on making everything electronic smaller by the year, it seems strange that people might choose to lug around over a kilo of photography equipment when they could just as well slip a neat compact camera into their pocket.

But there are reasons...


Learn more - how to avoid camera shake with a digital SLR camera (or any camera for that matter!)