How to avoid camera shake

Learn how to avoid camera shake with a few simple photography techniques.

If you've already read my page on how camera shake is caused, you're already part of the way there.

Camera shake is caused by the camera moving as the shutter was open. Even a small movement will result in some camera shake.

The logical way to avoid camera shake is therefore...

make sure the camera doesn't move when you take the photo.

And the best way to ensure that doesn't happen is to either use a tripod, or, if you don't have a tripod, set the self timer on the camera, place the camera on a solid surface, then press the shutter button.

The camera will fire itself, and, with no-one holding it, you should avoid camera shake.

But if you don't have a tripod or solid surface...

There are various methods of holding a DSLR properly. Here are some examples which clearly show right from wrong. In the first example I'm standing upright and have my arms up high. This is a poor posture for taking photos because having the elbows up high causes your body to be unstable.

To avoid camera shake it's better to keep elbows tucked in tight to the body to make your body a more stable platform for holding the camera. The second photo shows how a camera (any camera, even compact cameras) should be held.

Or, another technique - especially if you have a digital SLR

Is to support the lens by the left hand.

Digital SLR camera lenses can be heavy and it makes for a more stable shooting platform if you support the lens from underneath. This is good practice no matter how you go on to brace yourself for taking photos.

But, if you want to avoid camera shake, this works just as well whether you're using a hefty digital SLR, or a tiny and svelte-like camera-phone. 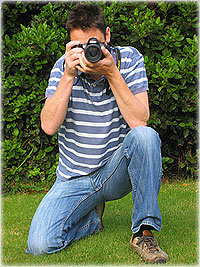 Have a look at the example on the left - it shows how you can brace your body to get a steady platform.

Here I'm kneeling down. Again, making sure elbows are tucked in and the left hand is supporting the camera lens. This time the left arm is braced on the knee.

This gives a really solid base for photography. The shooting angle is a little lower but this will rarely make a difference to the scene you are photographing.

Taking the concept of kneeling one step further, it may be possible to lie down to take the photo. 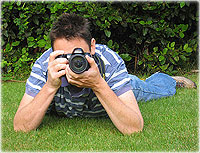 Have a look at the photo to the right.

In this position, aside from correctly holding the camera, I'm resting both elbows on the ground, effectively creating a "human tripod".

This provides a really stable base for photography.

So stable, in fact, that you could easily avoid camera shake when using shutter speeds as slow as 1/8 of a second. And that's pretty impressive!

Looking for props can help avoid camera shake too

And when I mean props, I'm not talking about a trip to the theatre! 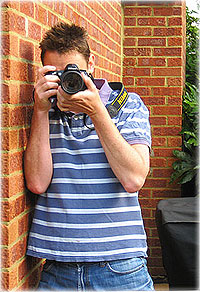 Props as in something to prop yourself against. In the image here I've found a wall to prop myself up against.

It's always worth having a look around to see if there is anything you can use to prop yourself up on.

If you lean against a wall or a post you can use that to steady yourself.

Lean against the prop and take aim!

Clearly this is only useful if you can find a prop in the area in which you are shooting.

That said, there is often something that can be used and it might mean moving your subject if possible (i.e. Asking people to move a little so you can keep your prop and still frame them in the shot).

Or, it might mean adopting a different shooting angle and photographing your scene differently.

Either way it's worth seeking out something if your shutter speed is low and you want to avoid camera shake.

and finally something for the more adventurous... 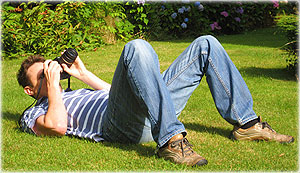 The final example (right) shows what you can do if you're shooting upwards – creating an interesting shooting angle and avoiding camera shake in one fell swoop!

Here you simply lie on your back, knees up to keep a steady position, and upper-arms resting on the ground.

An important point to bear in mind whichever shooting position you adopt is to be careful when you press the shutter button down.

Doing this will make the camera focus and meter the scene so that it is ready for the shot. Then, squeeze the shutter button down all the way to take the photo.

Some photographers even go so far as to control their breathing. The aim is to take the photo when you breathe out as this is when your body is that little bit more relaxed.

I can't say I've ever felt the need to control by breathing – but it might be worth a try!